Imagination Technologies (London Stock Exchange, IMG), a U.K.-based silicon and software IP licensing company, has recently reported that it swung from losses to profitability and gained rank on the IP roster by moving from fifth place to occupy the number four spot in terms of design IP revenues. IMG gained a 25% boost in overall revenues to $119 million and turned profitable ranking in $4.6 million net compared to a loss of $5.0 million in the latest fiscal year ended. Revenues were about evenly split between the Technology unit and the PURE Digital unit. On the balance sheet, inventories rose to $10.1 million from $6.3 million a year earlier. 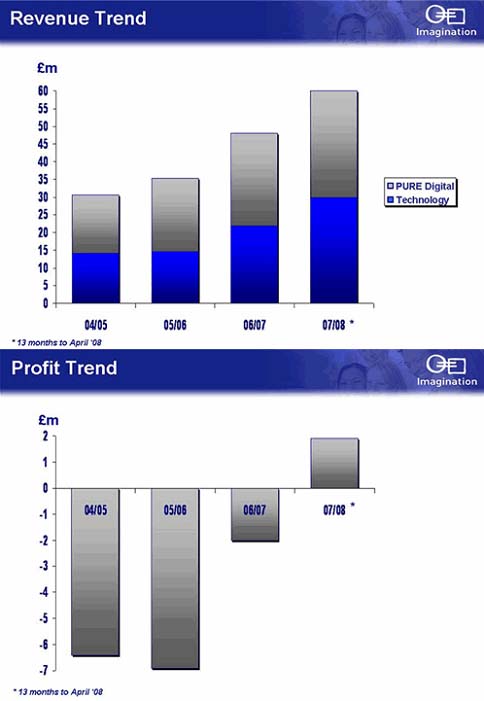 Gartner, which provided the latest IP company rankings, indicated that after three years of double-digit growth, the total IP market (technology licensing and design IP) last year grew only 8% to $1.9 billion. ARM was the IP leader with a 24% market share, followed by Rambus and Synopsys. The design IP market which represents the lion's share of the IP business grew 9% to $1.4 billion. The rankings in the design IP sector were ARM, MIPS, Synospsys and Imagination Technologies. MIPS jumped into second place since it acquired the number one analog IP provider, Chipidea. It is noteworthy that IMG grew 29% while ARM grew only 7%.

The company's "Imagineers" have developed a complement of IP cores for multimedia and communication applications. The Technology division portfolio is comprised of three IP families:

The PURE Digital division develops consumer-oriented products, such as DAB digital radios, and acts as a pathfinder for the Technology division.

IMG's IP portfolio is targeted to go after the following markets:

The company's business model is based on IP licensing with an up-front license and design-services fee, as well as per-unit royalties. To complement its IP licensing activities, the firm offers support services such as complete SoC design, customization, and design tools. 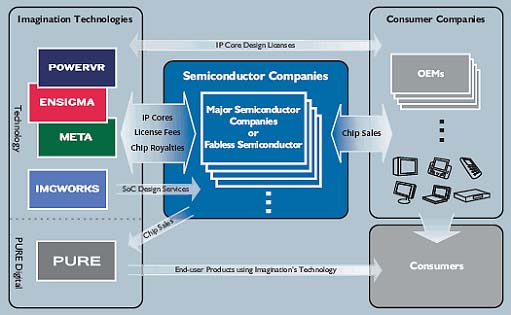 Operating with a staff of 450 employees (80% on the engineering side), IMG has development activities at its HQ in London and at R&D satellites located in Chepstow (U.K.), Leeds (U.K.), and Pune (India). The Indian development crew has grown to 50 engineers. About half of the company's engineering resources are focused on PowerVR IP platform. Sales offices are maintained in key worldwide regions.

As a brief history on the company, IMG has been around since 1985 and has gone through several reincarnations and evolutions. Originally called VideoLogic, the early products focused in the areas of graphics and sound acceleration, home audio systems, video-capture and video-conferencing systems. By 1999, the company has made a strategic corporate decision to re-orient the company to become an IP licensing firm and, consequently, the name was changed to Imagination Technologies with two operating business units. The VideoLogic brand was renamed to PURE Digital as the metamorphosis was completed over the ensuing years. PURE Digital continues to be a profitable cash cow for the company and is also a test bed for new IP developed by the Technology division. In 1994, IMG was listed on the London Stock Exchange.

The company is headed by Hossein Yassaie who serves as CEO. Prior to joining Imagination Technologies in February 1992, he was with STMicroelectronics and Inmos for eight years, where he set up and managed the DSP and digital video developments. Ultimately he became responsible for the system divisions, including research and development, manufacturing and marketing. Hossein joined the board in 1995. Hossein was technical director at Imagination Technologies before becoming Chief Executive Officer in June 1998.

The company received a notable boost in the validation of its PowerVR IP cores in October 2006 when Intel decided to invest in IMG. Intel's interest was to use the core in its PC, mobile computing and consumer architectures in certain market segments. Through its investing unit, Intel Capital, it purchased six million shares at 88 pence representing 2.9% of the issue share capital.

IMG has been growing revenues and staff levels as it pushes to reach its goal of becoming the third largest provider of design IP worldwide. Another longer term goal is to achieve 200 million annual unit shipments by its partners by 2010. While its profitability has been spotty, the company has managed to license the world's largest semiconductor IDMs and has attained significant traction in the IP market with upward momentum in the rankings.