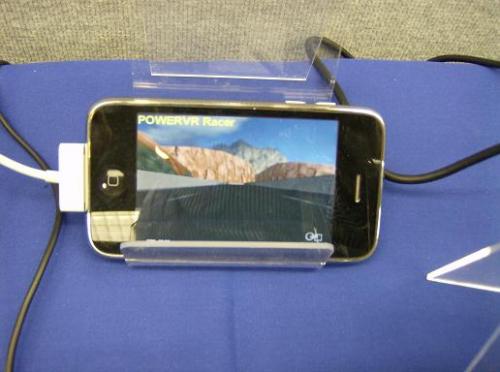 Imagination Technologies is one of those companies you may not have heard much about unless you are a serious techno-geek. They are the unsung heroes behind much of the amazing graphics technology we enjoy on our mobile devices (including the iPhone). Particularly in the area of 2-D and 3-D graphics rendering and acceleration for games, multimedia, and the slick interface animations we have come to expect on our devices. Their product line is integrated into a number of mobile device types, and I was able to get a preview of their latest and greatest technology at CES this year.

First, I should explain a little about graphics technology in general, so forgive me if you already know this. Your PC probably has a discrete graphics card (maybe you even purchased one and installed it yourself). If you bought a particularly pricy high-end model, you probably noted that your power and cooling requirements went up markedly (not to mention space in your PC case). If you do nothing about the heat/power, not only can it be damaging to your PC, but can cause lock-ups and unstable behavior. You will get better graphics processing to play high-res 3-D games, but that comes with the price of having to add more power and cooling. If you stick with on-board graphics (which is typically not very robust), you suffer from poor performance, but won't suffer a cooling or power problem. A conundrum if you now shrink the computer or technology in question--so, consider the same high-res processing of graphics data on a much smaller mobile device? You can see the problem, as adding discrete graphics eats up space and adds considerable power drain. This is where Imagination comes in with their System-on-Chip integrated design, essentially a processor core built into the main phone chip and dedicated to the task of rendering graphics, or pushing of bits to output. Their POWERVR line of graphics processing tech can do this kind of specialized data crunching in a very small physical footprint, and for very low-power requirements, which is some of the magic behind why the iPhone has superior graphics processing capability. 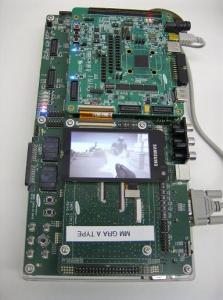 The IT presenter for my CES demo started with some compact legacy and existing tech (see the first pix posted above). It's essentially a test board connected to a Samsung mobile display running a common gaming benchmark simulation. The important point here is the amazingly smooth frame rate achieved (see below video shots of IT graphics in action). The POWERVR graphics accelerator uses a very minimal amount of power and space, and can render high-res animations that include vector and 3-D graphics using pixel shading very effectively. All this capability can be packed into a small footprint and still drive animation and video playback at native screen resolutions (whatever the size of the display).

I was also shown a demonstration of a palmtop-sized Beagleboard running Angstrom Embedded Linux (from an SD card)--and another test animation. One of the stations included multiple high-res and HD program content (see above) all running in a matrix of small windows, and all rendered at normal playback speeds (this connected to a VGA converter out from a netbook). I saw no jitter, pixelation or stuttering in any of the display playback I witnessed. Of course I'm sure all the simluations were optimized for the purpose of the demo.

The mobile-related content was some of the most awesome. A wide variety of mobile products were on display, all running test animations and simulated test apps. Imagination Technologies graphics and communication technology can provide a fully intergrated compact System on Chip solution to OEMs, which will enable not only small devices like mobile phones to enjoy a rich media experience, but also other devices like STBs (set top box), and hardware-based control products.

One of the demos especially featured an amazing application of this technology. The test unit in this case was a touch-screen capable netbook, and the demo was a bit more interactive (as compared to the simple test loop animations I had seen previously). The screen follows an ever-growing tree with branching tips. As the animation progressed, the presenter touched branches on the tree, and where he touched, flowers would bloom in 3-D.It was pretty neat, and demonstrates the power of smoothly rendered, interactive 3-D graphics in the POWERVR products. Another interactive demo involved a camera application whereby the presenter manipulates a 3-D cube. Within the sides of the cube's surface, you can see the presenters fingers manipulating or turning it (which is actually kind of a mind-bender).

Finally, the briefing ended with a demo of a larger screen version of very much the same thing. This time in a STB example. The menu animations and test graphics were amazingly good. The application of being able to enhance graphics rendering technology in this manner has astoundingly far-reaching effects. It not only opens new doors in traditional mobile technology, but makes a whole new range of devices possible. So, now the next time someone asks you how your iPhone does some of the amazing things it does, you will at least know part of the answer can be attributed to Imagination Technologies POWERVR graphics!