Apple’s impressive sales success with the iPad has convinced the rest of the consumer electronics world that yes, Virginia, there is a consumer market for tablet PCs. Indeed, there was no discernable demand for tablet PCs before the iPad (unless you want to consider eBook readers as a kind of tablet PC), and it’s likely that only Apple could have legitimized this market. 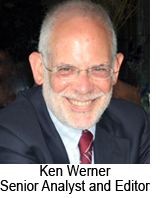 Now that the market is legitimized, though, the flood tide of competitors will soon be rising. At Computex Taipei last month Netbook creator ASUS launched its Eee Pad and MSI announced its multi-touch MSI Wind Pad, named for the company’s WindTouch user interface.

But perhaps the most interesting demonstration was of the pre-alpha MeeGo 1.1 for tablets. MeeGo is the Linux-based OS resulting from the merger of Intel’s Moblin and Nokia’s Maemo software platforms early this year. The software platform is designed to run on a variety of hardware platforms and devices, including smart phones, Netbooks, connected TVs, vehicular entertainment systems - and tablet PCs.

The tablet shown at Computex, held in Taipei June 1 - 5, was a technology demonstration based on an Intel Moorestown-based device, but there is no intention for MeeGo to be limited to Intel platforms. Nokia is reportedly producing an ARM-based tablet scheduled for release before the end of the year. But the Moorestown processor is impressive. It’s based on the Atom Z600 series of processors, which top out at 1.9GHz (for larger platforms like tablets) and are substantially less power-hungry than their predecessors. This compares to the iPad’s ARM-based A4 processor that runs at 1GHz.

The horsepower is evident in a "preview of MeeGo tablet user experience" that appeared on the MeeGo Review website a few days ago (http://meegoreview.com/2010/06/preview-of-meego-table-user-experience/). The interface is rich, varied, and fast, as the video shows, marking the iPad, polished as it is, look like a Gen 1 device. 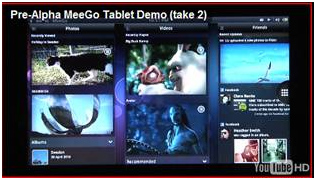 Other hardware specifications of the MeeGo tablet were picked up from miscellaneous comments, and should be taken as tentative at best. The demonstrator platform, perhaps more like a reference design, appeared to have a battery life in the vicinity of 6 hours, a weight somewhat higher than the iPad’s, and a screen that was smaller. However, the demonstrator was not a prototype of anybody’s product, and considerable refinement can be expected before a product is released. After all a smaller screen, decreased battery life and higher weight are not necessarily going in a user-preferred direction. It is rumored that Nokia’s ARM-based MeeGo tablet will have a 7- or 9-inch display, for example.

Earlier this week, I had a chance to speak by phone with Guillaume Largillier, Co-Founder and CTO of the French touch-screen developer Stantum. Stantum created a buzz at SID 2009 (and elsewhere) with its patterned resistive touch screen that supports multi-touch that can track up to 10 simultaneous touches, and announced two tablet design wins at Computex, including one with the big Chinese PC maker Great Wall.

Largillier said MeeGo-based tablets should be available 1H’11 for various carriers worldwide, and called it "the best tablet I have seen so far." It may be significant that the MeeGo demo includes a finger-painting app that smoothly tracks five simultaneous finger motions.

Largillier also said Stantum is addressing the tablet input issue. The iPad is limited by its lack of a good content-creation mechanism, which has resulted in its being called a "content consumption device." Largillier’s solution is to design a touch system that simultaneously supports touch (meaning finger touch) and writing with a stylus. He says that the significant limitations of previous handwriting-input systems can be solved by storing the handwriting input as "electronic ink" and doing the handwriting recognition subsequently as a separate step. Excellent handwriting algorithms, including the one in Windows 7, have already been developed. The key step now is to capture the electronic ink so "the handwriting looks beautiful," said Largillier.

For the first tablets, though, the emphasis will be on the graceful integration of multi-touch, with handwriting recognition to come later.

There is a deluge of international tablet creativity on the way. Apple can’t stop it and can’t sue it out of existence, as it attempted to do with touch screens on Android-based cell phones. What it can do is try to stay ahead of the pack. I wonder what the iPad 2 will look like, and whether it will be out by January.