Specifying and Characterizing Tactile Performances for Multi-Touch Panels: Toward a User-Centric Metrology

Whereas Vision Human Factor (VHF) studies provide an abundant literature to characterize display modules, building a specification for touch sensitive systems - and more noticeably for multi-touch capable ones – remains substantially empirical. Existing metrology gives useful data with regards to the mechanical and optical performances of touch panels. However, it fails to measure what import the most to the user: tactile performances. With the fast-growing market demand for Multi-Touch panels emerges a need for a user-centric metrology to objectively evaluate the usability of available solutions. 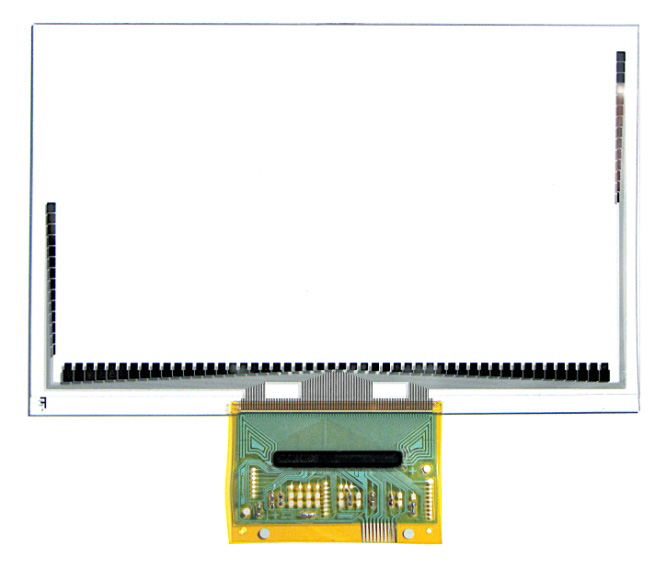 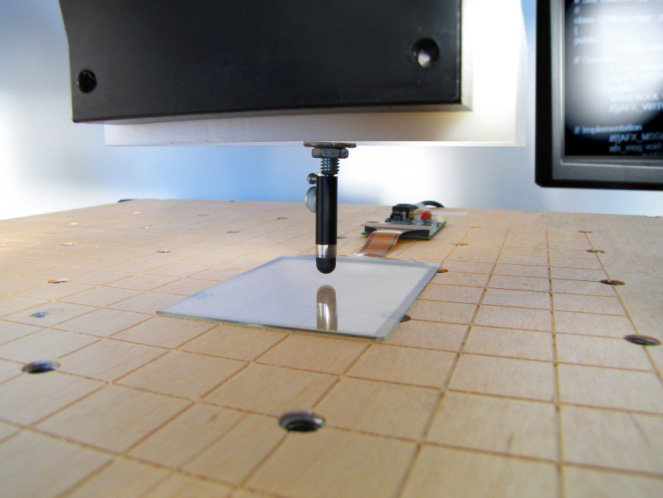 Assessing the suitability of a Multi-Touch solution for a specific purpose actually raises a plethora of questions: How many contact points must be reported at once? What is the desired activation force? What is the minimum distance between two neighboring touches? What is the expected response time for each concurrent touch? Should a large-size contact area (e.g., a palm) and a small-size one (e.g., a fingertip) be reported similarly? Is touch pressure information required? If so, how many levels of pressure are necessary? The list of questions would be too long to be exhaustively covered by this article.

For simplification purpose, we propose to sort tactile performances within three main categories:

This first category encompasses all the performances that are related to the quantity and richness of tactile information provided by the touch panel. The numbers of reported touches as well as the capability to discriminate different kinds of contact objects typically fall into that category.

This category is not about optical transparency. Here we find all the performances that make the user feel like he/she interacts seamlessly with the graphic user interface, exactly the same way he/she would do with real-life objects. For instance, any significant performances variation, such as scanning rate, due to a change of the number of contacts would fall into that category.

This last category agglomerates measurable performances that immediately impact the confidence a user may have into the touch device. E.g: jitter, contact’s merging distance or linearity.

Because touch panels are ontologically superposed to a display panel, common wisdom would dictate to align the tactile performances onto the display specifications. Thus, if a touch panel is placed on top of a VGA display, its touch resolution should be roughly equal to the display resolution (800x600 pixels); whereas its sampling rate should match the display frame rate (60 fps). In real life, such a mimetic translation happens to be misleading. On the one hand, reaching pixel resolution with the tip of an average-user’s finger is kind of utopist. On the other hand, if our eyes are lazy enough to be satisfied by 60 frames per seconds, scanning of fast and subtle gesture might require a much higher resolution as we will discuss later on.

1.3. Who should specify Touch Performances: a Chicken-and-eggs issue

Yet another difficulty is that Tactile Performances are in a large extent “application-dependent”. For instance, an unlimited number of simultaneous touches might be casual for a map application or a picture viewer, while it is essential for a video game or for a virtual piano. Because of this software dependency, it might be tempting to expect the specification to be defined by software developers. Unfortunately, such a posture leads to a chicken-and-egg situation; insofar as developing a multi-touch capable application requires a preliminary awareness of the objective capabilities and limitations of a given hardware solution. Hence, providing objective tactile performance indicators is a responsibility that belongs to the hardware solution providers.

The recently released Windows Touch Logo specification offers an interesting guideline, which might serve as a useful starting point for a usability metrology. Indeed, the test program provides a series of intensive tests (figure 7) meant to review various characteristics of a multi-touch solution. However, after (successfully) passing the test program, we found several limitations or drawbacks:

Another limitation of Window 7 Logo test lies in the fact that accuracy tests do not take in consideration the speed of finger movements; hence giving a partial representation of the touch panel precision.

The consistency of measured performances is not checked, although these performances might be significantly altered by various factors in the real-life of the product: humidity of fingers, EMI, battery state, etc.

Since these tests are to be performed by hand, it is impossible to reproduce the same conditions between different tests, thus making the Windows 7 Logo test improper for scientific usage.

Finally, some of the tests seem to aim at testing the user dexterity rather than the performance of the system…

At first glance, the accuracy of a touch panel is deemed the easiest parameter to specify and to check. In practice, this is far to be that trivial. First and foremost, the precision of a touch panel encompasses at least two distinct parameters: the pointing accuracy, and the tracking precision (figure 4). The former can be defined as the location of a stationary contact; while the latter correspond to the path following of a moving finger.

Suppliers of Multi-touch solutions usually provide typical or averaged values of their pointing accuracy. Quite often, those numbers are extrapolated from the technical datasheet of the IC controller – such as, for instance, the ADC bit-depth. Such numbers should be regarded cautiously; since we have already tested touch solutions claiming a 100 ppi resolution while disclosing a +/- 2 mm accuracy once exposed to real-life testing. Also, some technologies – such as diamond-patterned projected capacitive – have shown inconsistent precision from the middle to the edge of the screen; whereas other technologies might see their initial accuracy collapsing over their lifetime – such as analog-type matrix resistive. 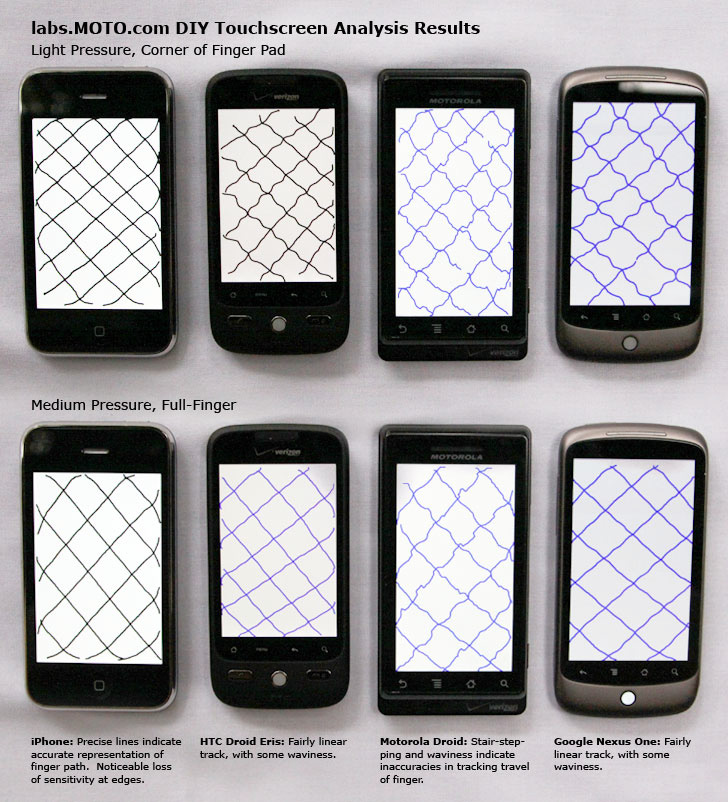 
Tracking accuracy is not only a factor of spatial resolution – it equally depends on the interpolation method and the acquisition rate. Even with a coarse measurement, a slow technology (ie, which scanning rate peaks at 40-60 Hz) will fail to deliver the amount of samples required for an accurate tracking of fast and subtle movements. Such a limitation can be crippling for applications involving drawing or handwriting.

In order to measure the tracking accuracy of our touch panels, we have defined a collection of tests that involves not only a given set of patterns, but also specified timings to draw each of them.

Figure 7 : Linear precision with specified timings for each trace

As shown by figure 9, an interesting complementary test consists in recording a sequence of pre-defined patterns with a high-resolution digitizer – for instance an EMR stylus from Wacom; then to reproduce the recorded sequence on a touch panel with a stylus or a plotter mounted on an automat. Hence, by comparing the original sequence with its reproduction, one may obtain useful accuracy statistics.

Yet another interesting and ease-to-implement approach consists in laying a sheet of paper on top of the touch panel, then writing and drawing a selection of patterns on said sheet with a common ballpoint pen. Once the writing session is completed, the sheet is scanned with a common office scanner having a resolution of at least 100 ppi. This enables to statistically compare the original paper document with the corresponding touch sensing image.

The responsiveness of a touch system is the most under-estimated parameter, even though it tremendously influences the perceived usability, transparency (as defined above) and trustworthiness of an input device. The level of required responsiveness greatly varies from one application to the others as illustrated by figure 8.

Figure 9 : responsiveness requirements vary from one application to the other

Here again, IC datasheet specifications need challenging by metrological methods. Indeed, the announced performances of a Multi-touch IC controller might be tremendously impeded depending on the screen size, the number of concurrent touches or the CPU load of the host device. Some capacitive touch panels we tested also noticeably tended to slow down when the device was battery-powered.

Videotaping offers a rough approach for benchmarking the overall latency of Multi-touch systems. As shown below, there might be a noticeable gap between the hardware refresh rate (i.e., the number of data packets per seconds reported by the driver) and the perceived result. Indeed, some IC manufacturers implement the cursor tracking algorithm onto the host CPU instead of embedding this function into the MCU, introducing an additional latency that will vary depending on the CPU load. 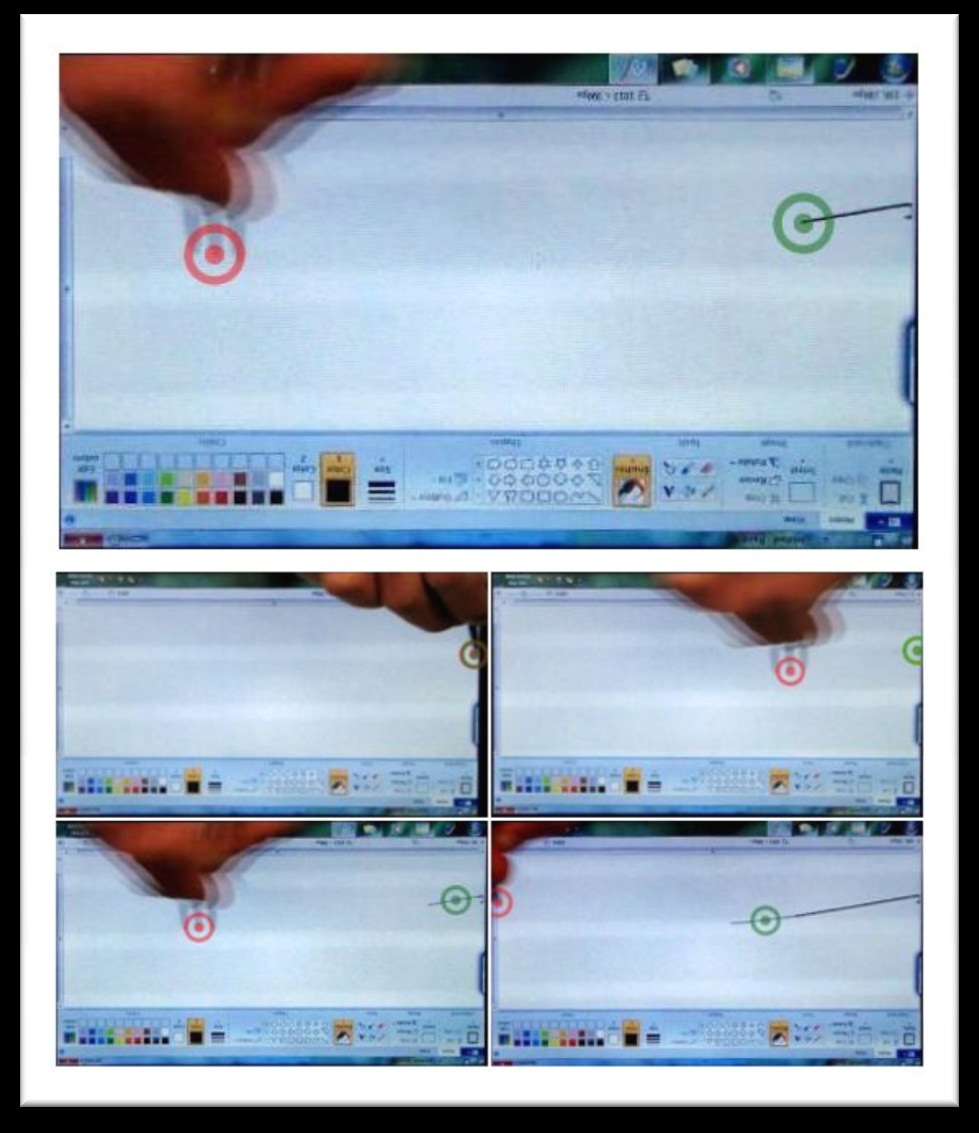 The market enthusiasm for Multi-touch technologies is such that this emerging industry is undoubtedly promised to a wealthy future - a promise that might not be hold though if the ever-increasing number of Multi-touch hardware suppliers fails to meet the end-users’ expectations. Such a disappointment would irrevocably turn them against Multi-touch technologies. Ill-adapted or poorly defined specifications might also discourage Software developers from developing the awaited “Killer Apps” which will drive and sustain the market demand. This is why we believe that developing an objective benchmark of tactile performance has become a key challenge.