Convergence and the Death of Market Specific Chips

Consumers are the ultimate judge of MCE (mobile & consumer electronics) success – and they are now demanding convergence of apps platforms and effortless performance at low power, whatever they're doing. As the cost of developing advanced SoCs (system on chip) to meet these demands continues to rise, designing such SoCs for only one target mobile or consumer market is both unlikely to deliver sufficient return on investment, and also probably doesn't consider all the myriad apps it's likely to need to deliver in order to gain favour with today's tech-savvy users.

Users want their apps to work wherever they are, and the technology has to do what they want, not just what engineers think is 'leading edge.'

There are two key factors driving the ongoing convergence in MCE: the massive and growing cost of making single chip solutions that deliver all the advanced features consumers are demanding and the expectation of a consistent level of experience, especially in user interfaces as well as games and other key apps across all platforms in all markets.

What is the cost? SoCs capable of running most MCE devices will easily cost between $20m and $50m, and in some cases much more to design and verify through to production – and that's before factoring in software costs.

Speaking at DAC 2010 Gartner's Gary Smith said: "The latest doom and gloom for the electronic industry is that design costs are out of control." He cited software costs as a major factor capable of taking overall design cost as high as $100m within the year.

The Four Horsemen of Convergence

Increasingly consumer electronics (MCE) devices have to deliver the internet, PC capabilities, TV, music, navigation and more in one platform.

Think of it as four screens – TV, PC, mobile and in-car – each increasingly capable of being connected to the 'cloud', an abstract internet server space from which common business and entertainment applications are accessed via web browsers or connected devices. 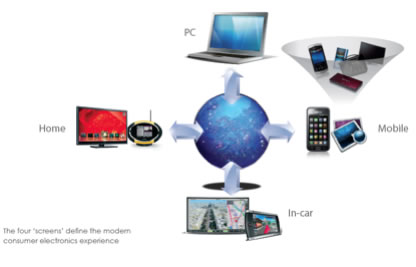 The chips behind those screens contain technologies which enable better delivery of the features that consumers want now, and new features which will enrich the consumer experience in the future. And whichever screen they are behind, the chips are becoming more and more the same.

Inevitably there is a tension between the desire to create comprehensive application platforms and also to spread the use of chips which can cost millions to make across markets to spread risk and reap wider reward.

The march of progress in semiconductors has created wide ranging product innovation. The ability to put the power of a computer inside almost any MCE product has redefined what previously humble categories - TV for example, or radio – were capable of.

However it's also made the world a much less simple place. Semiconductor manufacturers used to have separate teams focused on each market it served, with a different set of chips to meet the exact needs of that market. However that model of doing business is starting to break down – and convergence is the reason why. Now its all about how to make maximum reuse of all the key functions – CPU, GPU, video, communications, connectivity, peripherals – in each market variant, and to what extent it is more cost-effective to reposition (by using different packages, bond options, naming etc.) the same, or very similar SoCs with many common cores, to service all markets. And that market-specific differentiation is increasingly about the software and reference platform solutions.

Now it's all about the application.

Can your new TV cope without having an advanced UI? Does that have to be coupled to a set of streaming or internet services? Is Netflix enough? Or do you need gaming too? What about TV apps such as the BBC's iPlayer in the UK or Hulu in the USA? Are you going to make these downloadable from an app store, bundled with the product or from the service provider? Encapsulated in a package, like Google TV? Or design your own, like Qriocity? It's a complicated world, making TVs now. And the same is true for phones, tablets, STBs, gaming consoles, radio, and audio. That isn't to say a single function product that 'just does radio/TV/games' is dead – but what will be key is its ability to link to in-home networks and other products whenever consumers want to use it as part of their technology infrastructure.

From a product design point of view it's less like buying a book and more like getting a pen, a thesaurus and a push: go make something.

Its great that the semiconductors at the base of these products enable new features that expand existing categories but with the wealth of region dependent application services added onto the wide range of broadcast and video standards the cost of creating these products has gone through the roof.

Of course logic says it would be good to make just one chip and then sell to many markets, but that requires certain design considerations up front. One key architectural decision is how best to implement programmability – the ability to reconfigure the functionality of the chip to meet user's local needs, such as decoding whatever various video, audio or broadcast standards are available where they are depending on the apps and microcode loaded into it for example.

Do What You Do Best – Don't Try to Do Everything

How does one go about building these systems on chip? The main resource used is SoC IP (intellectual property). Chip designers now use IP cores in the same way that systems designers used to use ASSPs (application-specific standard products) or ASICs (application-specific integrated circuits) which would perform a given function as part of the whole system – say video decode or baseband demodulation. Each of these functions has now given way to complex processors optimised for these tasks knitted together using bus fabrics, resulting in the evolution of the SoC into a network of processors all working together to implement these functions.

The days of the CPU-centric SoC are over, though it remains at the heart of the intelligence of these devices. These days any heavy lifting processing is being done by one or more of these advanced IP processors, leaving the CPU free to execute high level code that can respond instantly to users' interactions.

There are now companies who's business model is based around the supply of highly programmable multi-function, multi-standard IP blocks that enable SoCs that can be used internationally and across markets, thus dramatically reducing the overall cost of advanced SoC design. For example Imagination Technologies, which specialises in multimedia and communications IP, has GPUs, multi-standard Wi-Fi and broadcast receivers and video encoders/decoders all of which come with the full range of software and codecs required to support the full range of worldwide graphics, broadcast, audio and video standards.

However flexible multi-standard support isn't the only thing that modern MCE chips need. Increasingly they need to compete not only with products in their own category but also with user expectations brought from other product categories.

A clear example right now is the reinvigoration of TV UI (user interface) and applications which is being driven by user expectations of advanced UI carried over from the mobile phone market. Or the increased requirement for Blu-ray and DVD players to also cope with video formats designed for the fluid and programmable world of computing.

The cross-over requirements of modern devices are considerable. UI is the key driver of this trend, closely followed by video. But applications like navigation and gaming are also moving across device categories in a very fluid way. One might these days reasonably expect to have navigation or location features on one's phone, car navigation system, hand held game console and computing tablet, with the user being able to move seamlessly from one platform to another during their journey.

If that's going to be the case then our next logical step is to use the same chip across many devices.

Take TI's OMAPs for example. According to TI, OMAP device target markets include:

They aren't the only ones with such broad ambitions either. There are similarly capable SoCs from Intel, Renesas, ST and others.

Of course there is still room for tailored devices. Often a company will create a baseline SoC with broad capability, then tailored deliveries for given applications. Most of this tailoring is done in the software realm today but new technologies for prototyping chips and customising IP based chip designs may in future see the return of a more cost effective version of the ASIC business model.

Many CE companies now focus on delivering complete application platforms which include 'App Stores' or connected services. A consistent hardware and software platform makes it possible to guarantee a wide user base to third-party applications developers. From this springs shared ecosystems with developers being able to transport their apps from phone to tablet to TV for example.

As we go forward new trends will start to impact convergence, most especially a growing trend is for ubiquitous connectivity in all forms of consumer electronics. Most consumer and mobile devices will need to be connected to the internet going forward and that means that services can be moved out of the product and into the cloud, with the device being fed those services via a portal. Indeed, this trend is expected to move beyond today's sophisticated 'big ticket' MCE products into far broader markets such as toys, healthcare, security and industrial products too.

Whatever that connectivity leads to, it's clear that it will almost certainly require more flexibility and convergence, and further evolution of the MCE SoC. The world is moving towards a multimedia-rich, highly connected place, with consumers at its heart.