The SIGGRAPH conferences continue to be a place of learning for me, and the 2011 conference was no exception. On the last day of the conference, I managed to squeeze in a meeting with Imagination Technologies to learn about their PowerVR graphics chip, and what's new with them. For those unfamiliar with these GPUs, this will make a perfect introduction to them.

Personally, I didn't really know much about either ImgTec or PowerVR. I've heard plenty about AMD and NVIDIA GPUs, but I've always taken mobile graphics for granted without taking the time to learn what was running under the hood. And let me tell you, there's quite a lot of muscle purring beneath today's mobile devices.

Here's the skinny: Imagination Technologies used to make PC GPUs back in the 3DFX days. Like many players in the market at the time, as technologies like OpenGL and Direct3D accelerated the graphics market, the PowerVR line was squeezed out of the competition. However, PowerVR adapted by finding itself a nice niche as a powerful yet energy-sipping solution, perfect for battery-dependent mobile devices. Fast forward, and today PowerVR chips are in a vast majority of hand-held gadgets, including the upcoming PlayStation Vita.

It is important to note that ImgTec are not themselves a hardware manufacturer. Instead, they design the PowerVR spec, and the designs and patents are licensed out to other companies such as Intel, Samsung, and Apple, usually working directly with these companies. There, they are often incorporated along with the CPU and other components into a system-on-a-chip, or SoC. This tiny footprint is what helps make petite-yet-powerful smartphones, tablets, and game systems.

Now that all know a bit more about PowerVR, let's take a look at it in action: gaming, in all its 3D real-time rendering glory. I have to say, OpenGL games running with PowerVR look stunning, even on the petite display of a smartphone. 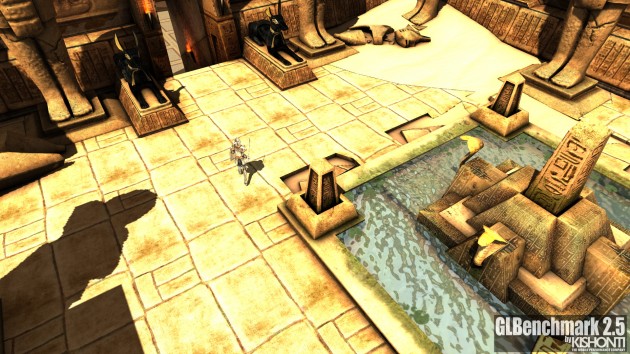 To really show what its capable of, the guys at ImgTec were running GLBenchmark 2.5, which ranks devices by performance. This pushes systems with reflections, blooms, lighting, bump mapping, and complex 3D models (Ed. note: Here's a great explanation of 3D jargon if you don't know what bump mapping is). While there will always be a tradeoff between complexity and smooth framerate, there was still enough sexy to be had to leave me impressed.

The one thing that the ImgTec rep was proud to explain to me was how PowerVR is unusual in how it renders out a scene. Using a process called Tile Based Deferred Rendering (TBDR), the screen is divided into tiles. In each tile, the GPU determines what is visible, and only draws what is actually seen. That way, rendering is done more efficiently, conserving battery life. 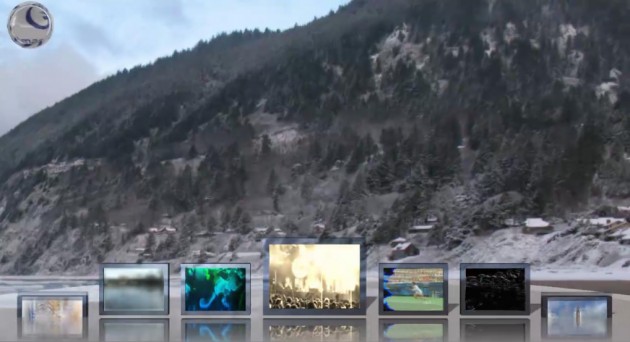 Even EPGs can benefit. Here, live-playing channel thumbnails pop out of the ground in 3D.

But PowerVR isn't just used for handsets and gaming. It is implemented in many other devices, such as Electronic Program Guides, or EPGs. Basically, these are the guides found on satellite, cable, and DVR set-top boxes. While usually dull and clunky, I was shown a sample EPG that used a silky-smooth 3D-animated interface. While an EPG with 3D graphical elements may seem like overkill, it felt like a breath of fresh air to me. It was simply more fun to use, and certainly more inspiring to look at compared to standard EPGs. I want this in my living room. 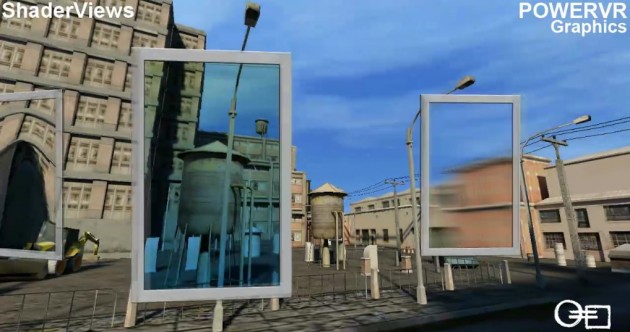 Looking to the future, ImgTec is dabbling with stereo 3D displays. Regardless of your opinion of gadgets with stereoscopic displays, PowerVR supports them. Demoing a phone with a Masterimage glasses-free stereoscopic parallax display, the GPU deftly handled the additional taxing from the dual images. The device also had some kind of switching optical barrier that allowed the phone to turned and used both in portrait and landscape mode while preserving the 3D effect. And fortunately, for those inclined, the system has a 3D effect intensity slider similar to Nintendo 3DS.

Finally, the next generation of the PowerVR platform is dubbed "Rogue". It brings yet more performance. Also, Rogue has better handling support for multi-GPU setups. This spells good for Imagination Technologies—while they currently hold the dominant market share, they now have NVIDIA's budding Tegra 2 solution to contend with.

Overall, I walked away from the Imagination Technologies booth feeling good about PowerVR. I'm shocked I came this far knowing so little about it, considering the significance of this company in today's gadget marketplace. Regardless, it was delightful to finally learn the brains behind much of today's handheld graphics, where it's been, and where it's going. And man, does it look ever so shiny! To see some of the technical demos I saw, check out their Demo Room.