Stantum has partnered with Nissha Printing in Japan to create an updated version of Stantum's iVSM (Interpolated Voltage-Sensing Matrix) digital-resistive touch-panel technology called "Fine Touch Z". The primary change is the addition of the transparent, pressure-sensing material made by Peratech in the UK. (See the article in the January 2012 issue of Information Display for a detailed look at Peratech's quantum-tunneling technology.) A typical Fine Touch Z sensor consists of a PET substrate patterned with the ITO columns, a layer of Peratech's material only a few microns thick, and a PET cover-sheet printed with cover-glass decoration and patterned with the ITO rows. The cover sheet has a 9H hardcoat, which may be the first time this level of durability has been available in any resistive touch-panel. Sensors will be available in the 5-in. to 12-in. range. In current prototypes there is a small air-gap containing a few extremely small spacer dots between the Peratech material and the cover-sheet; Stantum and Nissha intend to refine the sensor manufacturing process to eliminate the need for the air-gap.

The row & column spacing of the iVSM digital matrix hasn't changed; it's still around 1.5 mm, which produces excellent high-resolution handwriting.An additional improvement is a significant reduction in the minimum activation force; it's now only 2 or 3 grams, which is essentially indistinguishable from p-cap's "zero gram" activation force. The primary advantage of Stantum's iVSM core technology is the ability to use simultaneous finger and passive stylus with only a single sensor; adding the Peratech pressure-sensing material adds z-axis sensitivity with 256 levels. This allows the stylus to produce very fine artwork with varying line widths, or capture the full dynamics of a signature. Nissha's substantial touch-panel manufacturing resources should allow Stantum's technology to be much more readily accessible in prototyping and production volumes; this has been somewhat of a problem in the past due to Stantum's IP-licensing-only business model. The photo below shows a sample sensor produced by Nissha; note the extremely narrow borders in spite of the high node-count required by 1.5 mm squares. 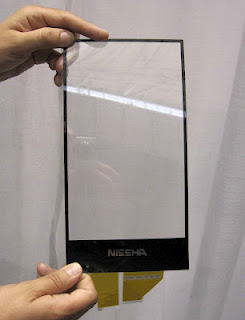