Imagination and MIPS Are Taking On ARM

ARM, a leader in mobile is going to be challenged by a semiconductor company who has coupled with a chip design form. The challenger held a conference to showcase its plan.

Last week, Imagination Technology Group,- a fabless semiconductor design company, had a press event and a gathering of over 250 guests from leading Silicon Valley companies. 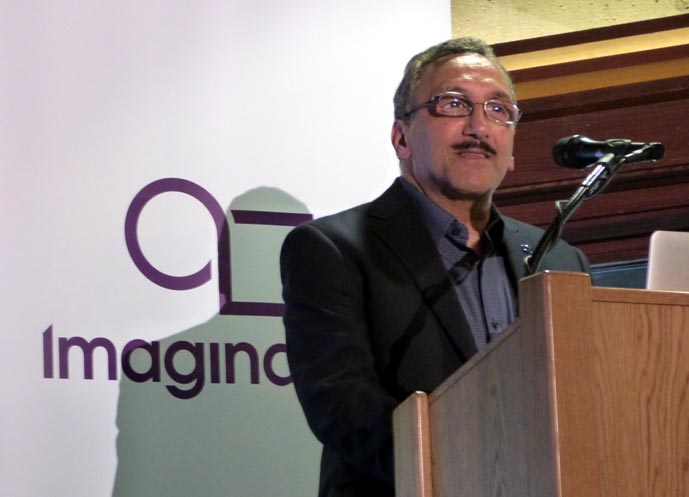 At Stanford University's Faculty Club, Imagination's CEO, Sir Hossein Yassaie, said they were showing "the growing relevance and importance of our latest technologies including the PowerVR Series 6 family and the upcoming MIPS 'Warrior' family to many partners and their markets."

Imagination purchased MIPS – a fabless CPU IP developer with 550 patents - after extensive negotiations, for $100 million in the winter of 2012. They are launching a major marketing effort to energize and expand the use of MIPS chips in all kinds of products, including servers, tablets, smart phones, and wearable computers. 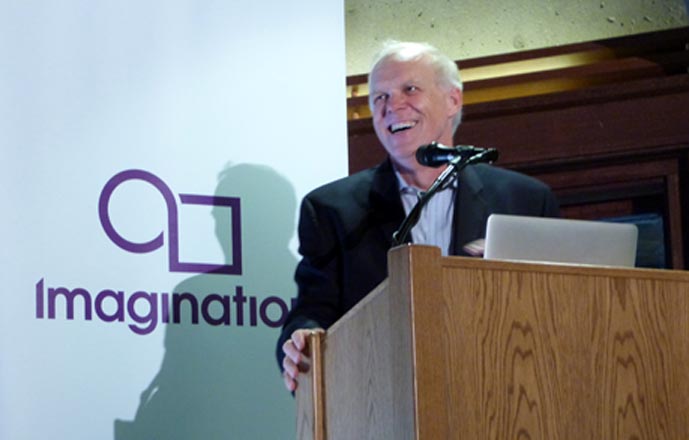 Stanford University President Doctor John Hennessy, co-founder of MIPS Computer Systems, briefly recapped the history and simplicity of the RISC architecture they researched which resulted in MIPS cores, the most power-and area-efficient processor designs compared to alternatives. He was enthusiastic about the secure future and potential growth of the MIPS Architecture under Imagination's leadership.

MIPS Computer Systems was founded in 1984 by a group of researchers from Stanford University that included the speaker, John L. Hennessy. In 1988, MIPS Computer Systems' designs were noticed by Silicon Graphics (SGI) and the company adopted the MIPS architecture for its computers. SGI acquired the company in 1992 for $333 million and renamed it as MIPS Technologies Inc., a wholly owned subsidiary of SGI. SGI spun MIPS out completely on June 20, 2000 by distributing all its interest as stock dividends to the stockholders.

Finances were never a specialty of MIPS management – a typical problem with an engineering dominated company. Engineers tend to believe in the old adage: all you need to do is build it better and everybody will buy it – which leaves marketing and sales out of the equation.

In early 2008, MIPS laid-off 28 employees from its processor business group. On August 13, 2008, MIPS announced a loss of $108.5 million for their fiscal fourth-quarter and said they would lay-off another 15 percent of their workforce. At the time, MIPS had 512 employees. In 2010, Sandeep Vij was named CEO of MIPS Technologies. Vij studied under Dr. John Hennessy as a Stanford University grad student. EE Times reported that MIPS had 150 employees as of November 1, 2010. If the 2008 EDN article was accurate about MIPS having over 500 employees then, it would indicate that MIPS further reduced their total workforce by 70 percent in two years.

Then, CEO Vij moved their market focus towards consumer mobile. This got the attention of the Imagination Technology Group in 2012 resulting in a protracted due diligence process prior to the final purchase in December 2012.

MIPS' ecosystem was historically aimed at the embedded processor marketplace and was a background player in consumer electronics products. MIPS was famous for their large patent portfolio. Allied Securities Trust (AST), a member-based patent holding company that helps protect members from patent infringement lawsuits by non-practicing entities, got 480 of MIPS 550 patents for $350 million. Imagination Technologies Group (IMG) paid $100 million for the remaining 82 patents that are directly attributable to the MIPS CPU architecture as well as MIPS' business operations.

An aside: AST currently has 26 members around the globe. Their mission is to purchase patents on the open market and sell them, or license them to their members, thus, helping to protect their members against patent trolls.

Imagination's CEO Sir Hossein Yassaie, boasted that there are now over 300 SoC's based on MIPS IP. Of the 5 billion devices shipped with Imaginations Technologies IP to date, 3 billion of them use MIPS IP. These include phones, tablets (especially in China), wearables, printers, network devices, storage devices, and video devices.

When Imagination Technology purchased MIPS everyone was wondering how they would integrate with their GPU product line, PowerVR. The PowerVR IP GPU is used by Intel, Apple, Samsung, Google, Nokia, MediaTek, Texas Instruments, NEC, NXP Semiconductors, Freescale, to name just a few of their IP licensees. CEO Yassaie does not see any problems providing both a SoC IP for GPU's, IP for CPUs only, and combining both IPs as a single SoC. 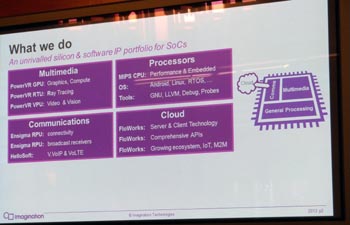 Yassaie continued with a bold statement: "The intent with MIPS is to cover all the markets where a CPU is relevant. In my discussions with many customers in the last six months - customers who have used both MIPS and competitor's solutions - the feedback for MIPS has been very, very positive from a technical point of view." MIPS CPU IP has proven itself in the tablet and phone markets with Ingenic and MediaTek leading the way. 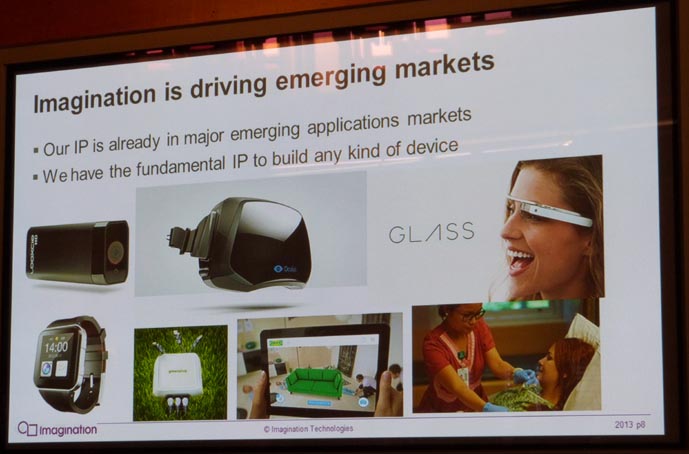 MIPS wants to grab a bigger share of the markets

MIPS is known in the specialized networking equipment world for their architectural licenses to Broadcom and Cavium. Those chips have been based on both 32-bit and 64-bit architecture. MIPS has been building 64-bit IP for over 20 years. ARM only announced their 64-bit IP less than a year ago. MIPS IP has been used in millions of 64-bit high-performance chips and MIPS designed their first superscalar chip in 1994 for SGI.

Doctor Hennessy predicted that, "the MIPS architecture is going to outlive the IBM 360 mainframe architecture."

Imagination's CEO Yassaie said MIPS upcoming Series 5 "Warrior" CPUs will cover every segment of the market, including servers, by the end of 2014. He told us it will take two to three more years for the chipmakers to create finished server products and get them into the marketplace. He emphasized, "I have to stress that the strategy with MIPS is not short-term. We see this is a multiyear plan. Our goal is to have 25 percent of the processor market within five years in terms of design elements."

During last week's press event, the Imagination presenters reminded everyone that MIPS is a fully supported architecture with Android source code and that Google is keen to keep it that way. CEO Yassaie said, "We put significantly more investment in the emulation and working on a technology known as MagicCode, which would emulate any backward compatibility or legacy-related issues." Imagination has developed a new LLVM (Low Level Virtual Machine) compiler, which allows apps to be developed in an architectural-independent intermediate language.

Imagination and Mentor Graphics extended their partnership for open source embedded tools chip design support all across the MIPS architecture. Amit Rohatgi, Imagination's Vice President of Segment Marketing, said: "to continue to grow our ecosystem, and take the MIPS architecture to new heights, Imagination and Mentor graphics have entered into a multiyear agreement. Open source tools and technology like Sorcery CodeBench are key drivers for the proliferation of the MIPS IP."

The MIPS architecture will benefit from a fully optimized implementation of all Sorcery CodeBench editions across all major members of the MIPS CPU family, from low-end to high-end, including the upcoming MIPS 32 and MIPS 64-based Series 5 "Warrior" generation of cores.

At the executive reception and showcase, many of MIPS IP licensees showed devices. A familiar name to BSN, Ingenic, showed a tablet powering a full-size display using a Broadcom MIPS networking device. 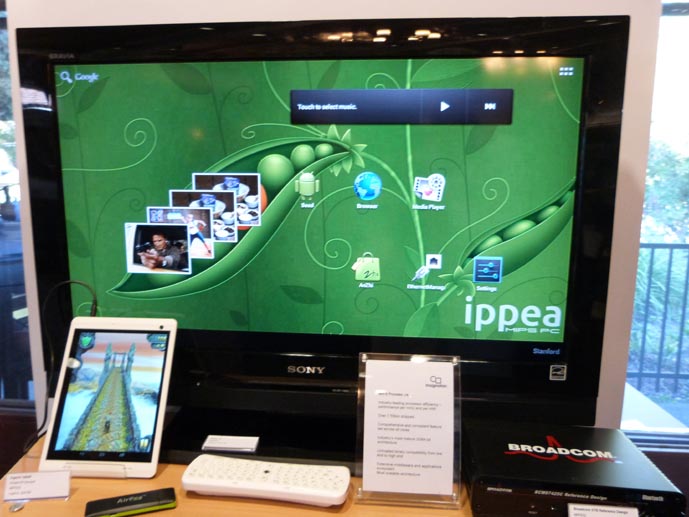 VideoLogic – a division of Imagination Technologies – announced the launch of PURE, a new brand for VideoLogic's premium home entertainment and consumer audio products. PURE will be shipping their version of VideoLogic's home entertainment products, including the DRX family of DAB digital radio tuners and DigiTheatre home cinema surround sound systems. 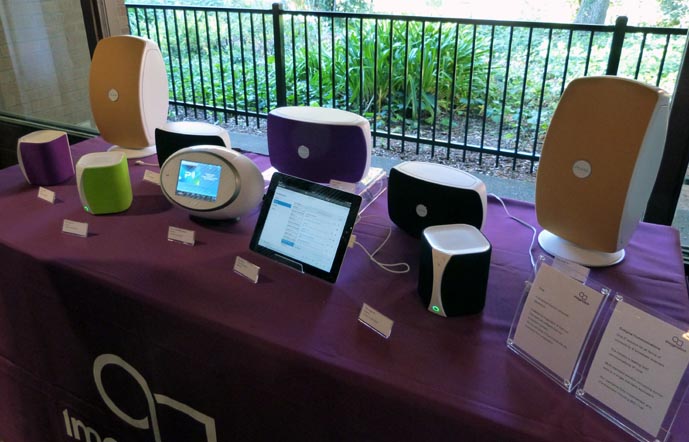 Ineda's Chairman of the Board, Doctor Sanjay Jha spoke briefly about how they are developing a new class of wearable processor silicon products that will be applicable to a multitude of wearable devices being introduced in the market today, such as smart watches, health/fitness devices, and glasses with small displays. Jha is the former chairman and chief executive officer of Motorola Mobility and previously served as the co-chief executive officer of Motorola. Before joining Motorola, Sanjay Jha was COO of Qualcomm and president of Qualcomm CDMA Technologies.

Many of the 250 attendees tried out two wearable devices. There was a smartwatch by Chinese phone brand GEAK the mobile hardware company and a division of Chinese online gaming company, Shanda. The Smart watch runs Android JellyBean (Android 4.1) and is powered by an Ingenic JZ 4774 MIPS processor clocked at 1 GHz. It also has Wi-Fi, Bluetooth, NFC support, 512 MB RAM, 4GB NAND flash, and a .55 inch LED capacitive touchscreen (OGS) with 240 x 240 resolution. 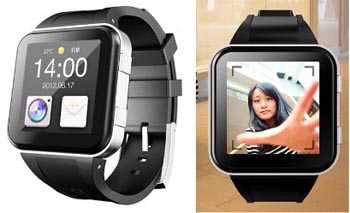 The other wearable at the showcase was Google Glass. Google Glass uses a TI OMAP4430 SoC with Imagination's PowerVR SGX540 GPU. The Google Glass device sits on the nose and around the ears similar to glasses, but features a small lens on the side. The glasses allow users to see, photograph, and record without using a smartphone. 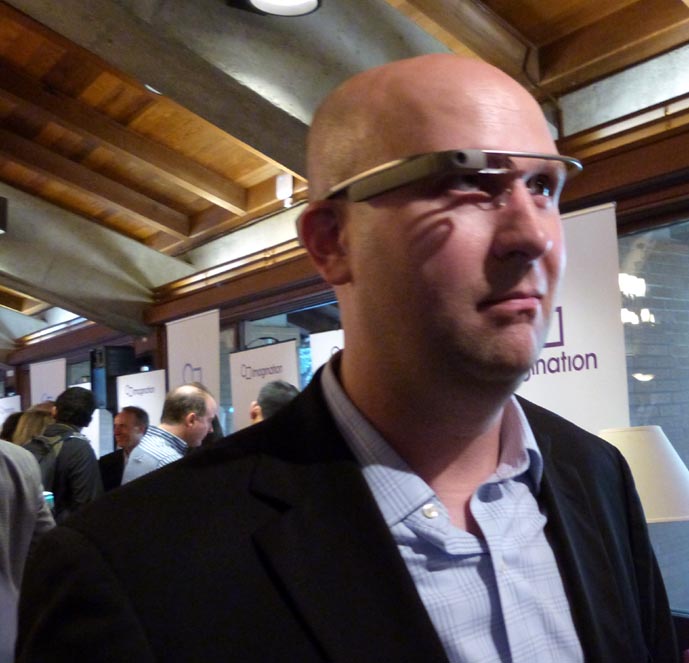 Google Glass will list options in front of the user's eyes, including Record a video, Get directions to, Send a message to, Make a call to, or Hang out with. All commands are obeyed via voice-recognition technology. One of the topics of conversation at the Google Glass demo was about a surgeon from Ohio State University's Wexner Medical Center who donned the new headset during a routine surgery last week, and streamed point-of-view footage live to a group of students on the other side of town. 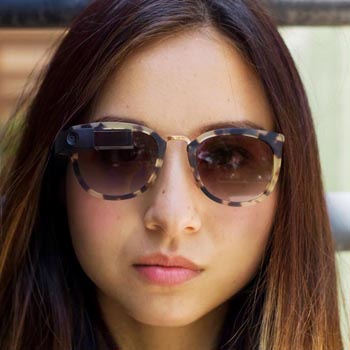 With over a billion devices shipped to-date with PowerVR IP, most of which are PowerVR Series5 and Series5XT GPUs, Imagination provides a mature, proven solution that is unrivaled in performance, scalability, efficiency and ecosystem support.

MIPS embedded processors have the potential to move into the low-power server marketplace. Paul Tisch, senior analyst with Moor Insights and Strategy suggests that the sales power behind the ARM server chips doesn't come from just the core itself. Instead, it comes from the supporting architecture which companies like Calxeda have provided. MIPS already supports Linux and Android, so moving an application to a MIPS server should not be time-consuming.

MIPS has shown that they can function in the tablet form factor. They have two major tablet form factor CPU IP licensees, Ingenic and MediaTek. Both will be shipping 28nm cores in the near future. MIPS foundry partner TSMC is diligently working on a 16nm FinFET tape out. TSMC's foundry projects will increase MIPS IP licensees performance and lower power usage.

Now comes the big question for Imagination and MIPS:
Can they execute, on their three-headed marketing plans, to meet their projected 25 percent of the processor market within five years?

BSN is betting this will be a tough uphill battle for the next two years, before anyone can evaluate whether today's marketing goals are realistic, or not.