Oregon Tech Adding Jobs, Boosting Wages and Leading State Back from the Recession 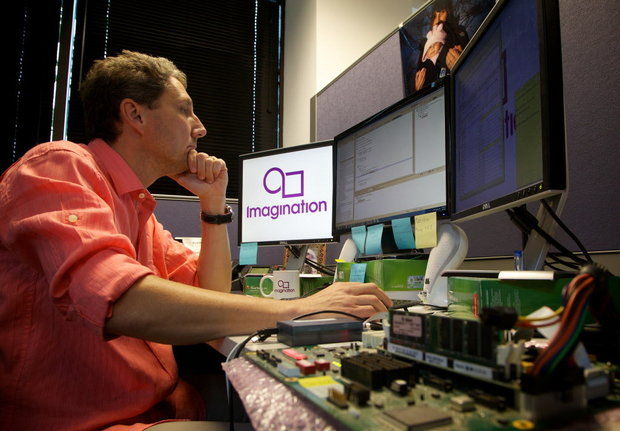 Kevin Mills, software engineer at Imagination Technologies' Beaverton office, works on software that the company sells to other product developers. Companies like Imagination, which play a supporting role in the tech industry, are fueling the ongoing growth in Oregon tech. (Benjamin Brink/The Oregonian) 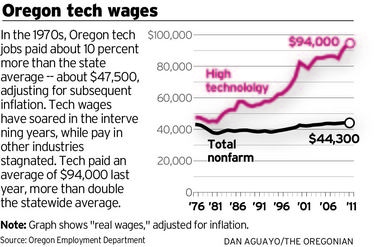 Oregon's technology sector is racing ahead of the rest of the economy, leading the state's recovery by adding jobs faster and paying more than twice the state average.

Though tech accounts only for 1 in 20 Oregon jobs, it has provided 10 percent of all the state's job gains since the recession. That pace reflects a strengthening ecosystem across the Silicon Forest, where young companies have tapped into tech's hottest trends from mobile devices to social networking.

And while most Oregon wages have been stagnant for decades, tech salaries have soared, and now average about $94,000 a year. By comparison, the typical Oregonian takes home $44,300 a year.

Both Oregon tech jobs and overall employment remain below pre-recession levels, according to a new analysis from the state's Employment Department, which takes a broader look at the tech community than prior reports. But the sector's growth represents a bright spot in the state's otherwise sluggish employment picture.

"It's really fantastic in terms of output, because it's such a productive industry," said Oregon state economist Mark McMullen.

"As such," McMullen said, "tech firms represent both a great opportunity and a risk to the regional economy going forward."

No really big tech companies have their headquarters in Oregon. Instead, industry has patched together its growth story by landing outposts from larger companies based elsewhere (Intel has 17,000 here, more than any other business), and with a cluster of Portland startups adding jobs as venture capitalists pour in money. Oregon startups raised $86.1 million in the first half of 2013, the strongest start to the year since 2007 -- the year before the recession began.

Imagination Technologies is emblematic of the type of employer driving the recovery in Oregon tech. The British company acquired its Portland office earlier this year with the purchase of MIPS Technologies, a semiconductor design company.

Imagination provides tools, equipment and software to manufacturers of TVs, smart appliances, smartphones and other electronics.

Similar businesses that provide supporting technology to others, an employment category called "Computer Systems Design," accounted for nearly half the sector's growth last year, according to state employment department. 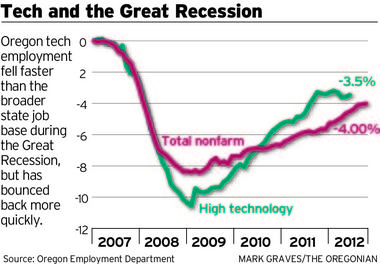 "Like every other industry, '08 to '11 was pretty miserable around here," said Stacey Lloyd, an Imagination engineering manager. "Things seem to have snapped back pretty quick."

The office had just over a dozen employees when Imagination arrived in February. and it is in the process of adding a dozen more engineers as it capitalizes on a broader rebound in tech and a deep talent pool in Beaverton.

Oregon offers a distinct combination of experienced engineers and an attractive lifestyle that makes it easy to recruit new employees from out of state, said Rick Leatherman, director of development tools in Imagination's Beaverton office. He said that makes Oregon a natural choice for continued expansion.

"I see nothing but growth from here on out," he said.

The difference is significant in a state with stubbornly high unemployment. Joblessness stood at 8.0 percent in July after Oregon added a paltry 900 jobs. Statewide, some 158,700 remain unemployed.

There are a few sectors of Oregon's economy growing as fast as tech, according to Josh Lehner of the state Office of Economic Analysis. Those include natural resources, professional services and private educational services. But none of those segments is as large or pays as well

The new analysis shows Oregon has an unusually high concentration of tech jobs -- below top-tier states such as California (home to Apple, Google and Oracle) and Washington (Amazon and Microsoft). But the state is on par with several other tech leaders, including Texas (Dell and Texas Instruments). 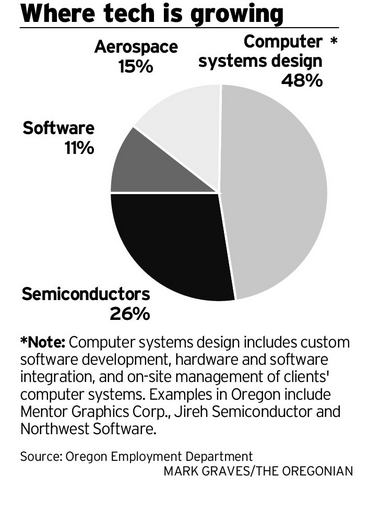 Much of Oregon's tech gains are tied to large California companies; Salesforce.com, eBay, and New Relic have all acquired or established large outposts here in recent months. Intel's Oregon payroll totaled $2.2 billion in 2011.

In just a few years, they've each gone from a handful of employees to well over 100 in their Portland offices.

This new generation of entrepreneur is focused on software and web services, a departure from Oregon's historical roots in computer hardware (semiconductors still provide nearly 1 in 3 Oregon tech jobs.)

That diversification is important, said McMullen, the state economist, because it prevents Oregon from growing too reliant on one type of technology business. That could, he said, insulate the state from the kind of downturn that demolished Oregon tech following the dot-com bust.

The proliferation of startups reflect optimism about technology's fortunes, McMullen said, and raise the possibility that Oregon will eventually develop large, homegrown technology companies. Tektronix, the godfather of Oregon's tech industry, spun off dozens of smaller businesses during its golden age from the 1950s into the '80s.

"We're starting to see a lot more folks dip their toe in the water, and that's good from a broader economic perspective," McMullen said. "Because some of these folks are going to get lucky."