Imagination on the Move 2013: PowerVR, MIPS, and More

Imagination Celebrates At Stanford, Where It All Began

Last week we took a trip to Silicon Valley for a briefing on Imagination Technologies' roadmap, including new PowerVR GPUs and the future of MIPS. "There should always be Pepsi wherever there is Coke," it was said, and Imagination wants to be Pepsi.

CEO Sir Hossein Yassaie
In striking contrast to its presence in popular consumer knowledge, Imagination Technologies is one of the few companies that can legitimately bill itself as "global, everywhere, and in everything." Having shipped 535 million units last fiscal year, the company's technology is now present in more than 5 billion products.

In many respects, last week's "Imagination on the Move" press event at Stanford University was equal parts a celebration of the company's role in the global tech industry and a showcase of its plan to gear up for the next phase of growth by providing software and silicon IP to suit any conceivable device.

Given the event's location, it's fitting that Imagination's strategy focuses heavily on restoring MIPS to its former glory with the intention of bringing balance to the CPU market. Of course, we were also shown a new generation of the company's PowerVR GPUs and VPUs, Ensigma communication processors, and evidence of the continued partnership with TSMC. Should it realize its goal, Imagination is hoping that a focus on heterogeneous processing will result in combined sales of 1 billion units in fiscal year 2016 and a 25 percent share of the CPU IP market within the next five years.

Even if we put aside the ambitiousness of Imagination's sales projections, it is very much an open question as to whether MIPS will be able to effectively compete against ARM-based processors, which currently account for over 90 percent of the mobile device market, to effectively become the de-facto choice for the entire product category.

MIPS: Now Brought To You By Imagination

The past few years have given me no shortage of opportunities to draw parallels between MIPS and Kodak. You see, both companies helped shape their respective industries, yet were ultimately surpassed by their competition and exiled to the annals of history. Consequently, Imagination's decision to acquire MIPS for $100 million in December 2012 and subsequently license nearly 500 of the company's patents did come as a considerable surprise.

Speaking about the due diligence process before the acquisition, CEO Sir Hossein Yassaie explained that two main factors fueled the ultimate decision to go through with it.

First, he stated that MIPS processors offer the cleanest "true RISC" architecture and that they had "maintained elegance" for over 20 years, facilitating superior performance in a smaller size with unmatched low-power credentials.

Second is the belief that ARM's entrenchment presents a danger of stifling the CPU landscape (perhaps similar to what we're seeing in the desktop space), and that the market requires "balance and credible choices" to reach its full potential. Hence, his oft-repeated adage that:

"The industry needs MIPS as much as MIPS needs the industry, because no industry can operate in an environment where it is a near-monopoly. I often say on this subject that wherever there is a Coke, there will be Pepsi. And MIPS is here to make sure that there is a Pepsi."

With regards to Imagination's objectives for MIPS, the company aims to ensure that people feel confident about the future of MIPS, and ultimately develop a family of class-leading processors that combine the underlying values of MIPS' architecture with Imagination's deep understanding of ultra-low-power and heterogeneous processing. These efforts be seen first in the MIPS Series 5 "Warrior" processors, though the company eventually aims to target any device requiring a CPU, from smartphones to servers and wearable tech.

Although Imagination has yet to provide full technical specifications for those next-generation processors, the company confirmed that it plans to offer binary 32- and 64-bit compatibility across the full range, in addition to promising the best performance and lowest power consumption in a given die area. The family will also incorporate the MIPS SIMD Architecture (MSA), which it says will help developers leverage old code as they write new software, provide a highly-scalable security framework for content protection and networking protocols, and hardware multi-threading in select cores.

The MIPS Series 5 "Warrior" cores should arrive this year, with availability for all product devices and markets tentatively scheduled for the end of 2014.

Due in no small part to their inclusion in Apple's iPhone, the PowerVR-series mobile GPUs have emerged as one of Imagination's most important products. The company created an ecosystem of 40,000 developers, we already know that it's shipping in a great many smartphones and tablets. The Series 5 and 5XT "SGX" GPUs, in particular, are part of more than 100 upcoming devices.

Of course, no showcase of PowerVR would be complete without an appearance from the next-generation Series 6 "Rogue" GPUs. The Rogues are currently shipping in four SoCs, and will be featured in another 20 that are currently either in the production or development stages. 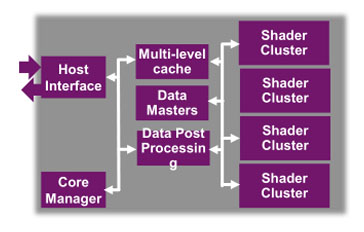 First announced in May 2013, Imagination is working with TSMC on the development of its Series 6 GPUs. Last week, the company specified that the partnership is focusing on highly optimised IP libraries and fully characterised reference system designs for Imagination's IP cores on TSMC's 28HPM (which is 28 nm high-performance mobile computing-optimized) and 16 nm FinFET processes.

According to the company's press material, initial results from the collaboration include a claimed 25 percent performance improvement to the GPU core, with certain blocks demonstrating up to a 30 percent increase over the existing design. We don't have any benchmarks to back those speed-ups, but Imagination says it'll formally demonstrate the results using a test chip later this year.

It was also revealed that future Rogue GPUs will include Ray Tracing technology via a Hardware Ray Tracing Unit (RTU) to allow for the dynamic handling of lighting effects. In addition to potential benefits to realism, Imagination says the RTU will help enable no-compromise GPU compute, as the graphics core handles rendering and general-purpose processing. The addition of this feature is a direct reflection of Imagination's view that the GPU is the coming decade's silicon process driver, will occupy up to 50 percent of leading-edge SoCs, and offer performance that scales linearly with area. Sounds like the opinion of a few other companies we cover...

Fully implemented, Imagination projects that these features will allow the PowerVR Series 6 GPUs to lead the mobile GPU space, offering computational power ranging from the 100 GFLOPS cores that are currently available to 1 TFLOPS cores that will arrive in the near future.

The PowerVR Series 4 VPUs aim to meet the ever-increasing demands for streaming video, allowimg for the transmission of 4K content without obscene bandwidth requirements, it says. To this end, the VPUs offer support for H.265 and HEVC, 10-bit color, and configurable hardware that is currently rated for 1080p/60 HD decode in 28HPM with a power consumption of under 10 mW.

Rounding off the unveilings from Imagination's event was a trio of connectivity technologies: Ensigma for on-chip communications, FloWorks for the cloud, and HelloSoft for V.VOIP communication (Video and Voice Over IP).

The Ensigma RPU is essentially the final component of Imagination's ideal fully-integrated SoC. It removes the need for discrete radios by providing integrated on-chip communications hardware. 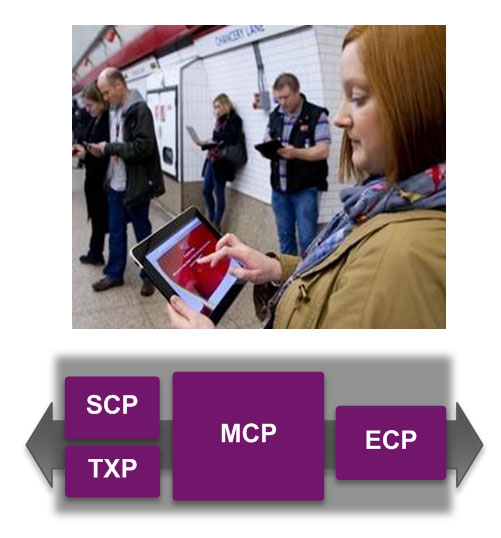 The newest Ensigma RPU, the Series 4 "Explorer" offers connectivity for every 802.11 Wi-Fi standard, Bluetooth, TV, and radio. Explorer will be available in both integrated and standalone variants.

According to Imagination, FloWorks aims to offer simple APIs with shrink-wrapped support for basic services that enables devices to communicate with one another for content sharing and to easily create an ecosystem for a wide range of services including: IoT, M2M, media streaming, and subscription/transaction-based models.

Last but not least is the somewhat awkwardly-named HelloSoft, an integrated, unified voice and video communications technology. HelloSoft merits mention for its optimized media engine, which offers enhanced voice (EVQM), dynamic video quality management (DVQM), and is capable of operating on any device, regardless of platform, connection, or process.