I'm still sorting through the vast amounts of interesting new things I saw at CES this year. One item that has so far slipped through the cracks in our coverage is an intriguing new technology the folks at Imagination Technologies were showing.

In its expansive CES suite, alongside demos of a bunch of conventional technologies that you might find in a tablet or a smartphone, Imagination had a little display for "PowerVR Ray Tracing" that said beneath: "The future of realistic graphics."

I immediately found this claim interesting because Intel used to talk pretty bullishly about ray tracing—a complex rendering technique that literally traces individual light rays as they bounce around inside a simulated scene—as the future of real-time graphics and gaming. AMD and Nvidia have generally been more cautious on this topic, talking about ray tracing as one technique among many, not an obvious future destination. Since the cancellation of Larrabee and a shift in focus at Intel, the "ray tracing is the future of motion graphics" crowd hasn't had an obvious champion among companies that produce GPUs. Now, it appears a major graphics IP provider, the one whose graphics processors power every single iPhone and iPad, is pushing ray-tracing as the future.

Not only that, but Imagination is actively working on making real-time ray tracing a practical reality. 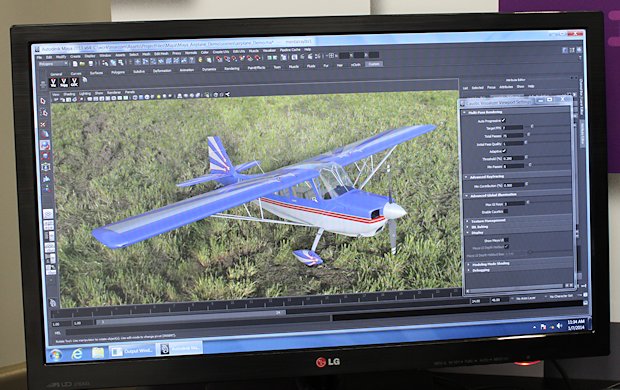 Above is a shot from the demo the firm had on display at CES. This scene with the airplane surrounded by incredibly complex vegetation was being rendered in near real time by a test chip sitting in a PC under the counter. When the camera's position was adjusted, the demo system would draw a new frame in maybe a second or less. That's pretty quick for ray tracing of this quality. 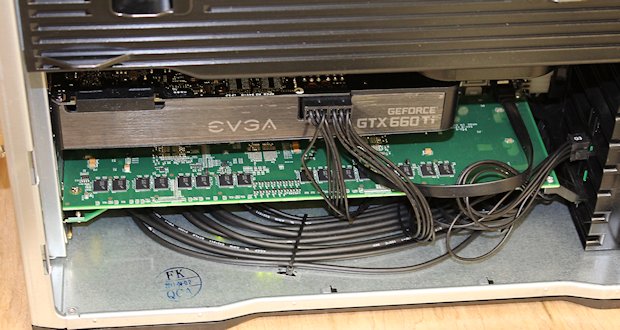 Ever skeptical, I was able to persuade the Imagination rep to show me the guts of the system running the demo.

What you see there beneath the graphics card (which is presumably just being used as a display output) is an engineering board sporting an Imagination test chip. The firm has developed some silicon IP to enable fast ray tracing, and it already has a test chip up and running. As one might expect, the test chip's performance isn't anywhere near that of a final product. Imagination claims ray tracing at 1080p and 60 FPS will be "feasible in several years."

In fact, this ray tracing logic appears to be an add-on to the company's existing PowerVR graphics cores. It's slated to become available "in a future version of PowerVR," and the firm believes this IP has a "surmountable" cost in terms of silicon area. In other words, Imagination thinks it can persuade its customers to adopt a version of PowerVR with real-time ray tracing logic included. If the company is right about that, we could potentially have tablets capable of producing near-photorealistic real-time visuals within the next few years.

Imagination has even created the cross-platform OpenRL API and released a downloadable SDK to enable the creation of applications that use ray tracing.

I wasn't able to extract much more information about this new ray-tracing IP or how it works, but I expect to be hearing more from Imagination as this technology makes it further down the development path. We'll let you know when we find out more.