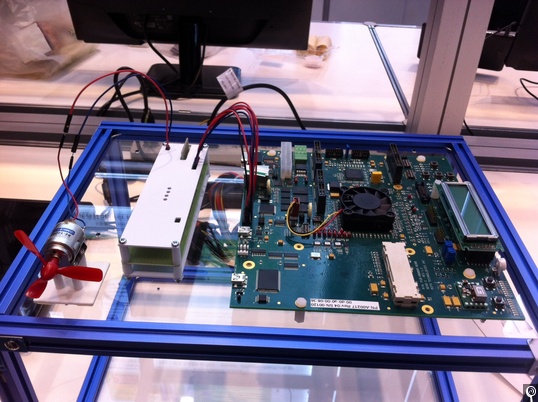 I usually think of Imagination Technologies as primarily a big player in graphics, but a team of Imagination reps showed how through mergers, acquisitions, and a lot of innovation they've become much, much more.

First, a range of MIPS-based GPUs were demonstrated in applications ranging from surveillance and facial recognition to ADAS systems, some of which start at a sub $10 price point. In addition, the company is making strides in CPU + GPU hardware virtualization, which has significant implications on imaging, mobile, and other applications with workloads that require both high levels of parallelism and single-threaded execution (or, a heterogeneous systems architecture (HSA)).

But perhaps one of the most surprising finds at the Imagination exhibit was how hardware virtualization translated into hypervisor development. Alexandru Voica showed me a demo of how the FEXEROX OX multi-OS platform developed by SELTECH Corp. securely executed an RTOS and Linux-based OS simultaneously on an Imagination MCU, enabling the pictured motor to continue running even when the Linux OS was rebooted. Just off the top of my head, I can think of dozens of embedded applications where this technology is applicable.