Creating an immersive, multimedia game to promote your brand may seem like an out-of-reach pipe dream, but it could be easier than you realize -- and worth more than you can imagine.

Imagine tearing through Chinatown, pursued by sinister figures, on a live scavenger hunt, while frantically using your cell phone to decode puzzles that ultimately reveal the location of an exclusive live performance by a fictional celebrity glam rock band. This is an actual scenario from the game X POD, launched this spring to extend the Douglas Coupland novel and TV series, JPOD, all set in the world of a fictional video game company. 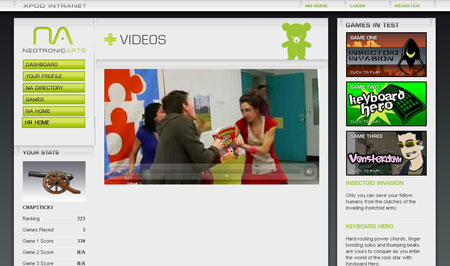 Immersive game play such as this is beginning to attract the serious attention of advertisers and sponsors as these player-focused experiences rise to a new level of prominence and provide a whole new degree of active involvement for consumers.

"But others find that slightly misleading, as most ARGs do indeed rely upon a single platform -- the internet -- to deploy 99 percent of their content, in whatever media format it might be in," Szulborski says. "The narrative pieces distributed outside the internet, in the form of such things as real world items, live interactive events and even payphone telephone calls, for example, usually represent only a very small piece of the overall story."

Rob Enderle, who heads up market research firm Enderle Group, adds that ARGs lend themselves to anything that can develop a fan base -- movies, TV shows, video games -- where players can imagine themselves inside the promoted property.

"Audi might use the movie 'Iron Man' as the basis for a game promoting one of its cars, but I'll bet it would actually end up being more effective at driving movie revenue for 'Iron Man,'" he says.

Like all forms of entertainment, ARGs work best when they engage the audience with the right elements of immersive storytelling matched with the right delivery mechanisms that allow suspension of disbelief and active participation in the experience, notes Susan Bonds, president of 42 Entertainment, a Pasadena, CA-based independent producer of immersive marketing campaigns.

"Fertile ground for ARGs includes movies, books, TV shows and game/console properties that already have a built-in fan base," Bonds said. "However, product companies can -- and are -- using the format to great effect (e.g., Windows Vista's 'The Vanishing Point'). ARGs for social awareness, charities and action are being executed and gaining attention as well (e.g., 'World Without Oil')."

Bonds adds that ARGs as standalone entertainment are also in development because the power of the art form is one that vividly captures the audience's imagination and allows those who comprise it to have a "starring role" in their entertainment. ARGs can also attract equal numbers of men and women -- largely due to the investigative element of participating in piecing the story together. "This appeals greatly to women who love mystery, crime and evidence-based entertainment," she says.

So what does it take to create and execute a successful campaign? Do the results justify the investment? Do immersive games really help brand a company's products and/or services?

Business model
Some notable ARGs have been produced by traditional agencies to promote products such as automobiles. But the most celebrated ARGs have been created by a new breed of interactive production companies whose work is primarily focused on the player's entertainment experience. These companies do not necessarily approach their work as advertising campaigns but rather as interactive stories (though these can, of course, incorporate sponsorship). It's a situation analogous to the early days of television in which a number of different business models co-existed, ranging from outright sponsorship to TV and film marketing initiatives to productions supported by the sale of game cards.

ARGs, notes Szulborski, are traditionally conceived of as community experiences -- they're designed to create and foster a community of involved players working collaboratively to discover and experience the story. Having an active community is not only a key goal but, "often plays a critical role in the experience itself, in the sense that the community's discoveries and activities drive the story of the game forward," he says.

Bonds says it's paramount to focus on creating positive entertainment experiences that communicate the core value of the brand -- "experiences that can engage consumers for extended periods of time and shift brand perceptions significantly. Companies are telling the audience that 'you are important to us,' and 'we have a brand with depth and creativity that deserves consideration.'"

The brand payoff
Bonds adds that although the value proposition for ARGs has yet to be fully explored, the format is currently being utilized to bring consumers into a deeper connection with creative properties and brands. For example, with "Dead Man's Tale," an interactive experience designed to showcase both Windows Live Messenger features and "Pirates of the Caribbean: Dead Man's Chest," more than four million consumers spent an average of 35 minutes playing the experience. 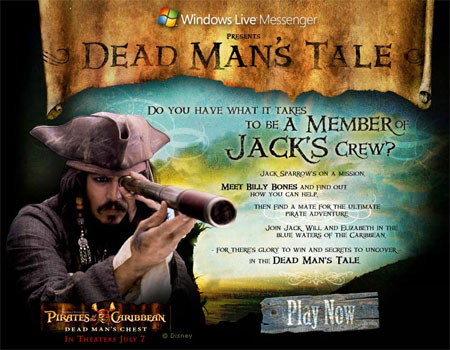 "This level of extended interaction with brands, properties and products has enormous value for brand perception shifting and increased consideration," Bonds says.

This might be true even if the brand sponsoring the game isn't the game's focus. McDonald's, for example, currently is sponsoring an Olympic-themed online game called The Lost Ring, in partnership with the International Olympic Committee. The game's websites, described by The New York Times as "mysterious and hip, like 'Lost' mixed with 'The Blair Witch Project,' don't reveal McDonald's sponsorship until players, while searching for clues, stumble upon the game's terms of service.

"I think finding out that it was McDonald's was kind of a big shock for everyone," Geoff May, a player in Ontario who founded a website on the game, told The Times.

McDonald's says the game, created by AKQA/San Francisco, had attracted 150,000 players by April 1, with 70 percent of traffic from outside the U.S.

Will the quiet sponsorship pay off for McDonald's? Sean C. Stacey, the founder of the gaming fan site Unfiction, thinks it just might, creating a strong bond between the youthful players and the brand that gives them a fun gaming experience -- for free.

Metrics
Because most ARGs are primarily web-based campaigns, most use standard web tracking methodology as a starting point for their metric analysis -- web page visitors, activity, duration of involvement with content, etc. But Szulborski says if the goals include brand perception changes, spawning online discussion groups, threads about a new product release, etc., "then a campaign is best served by employing standard web statistic models supplemented by some type of buzz tracking designed to locate and even analyze any discussion going on via the internet as to your target words or concepts."

As an example of how effective metrics can be in gauging campaign effectiveness, check out these stats from McKinney, a Durham, NC-based ad agency that created the ARG "Art of the Heist" for the Audi A3 in 2006. That campaign, according to BusinessWeek, attracted more than two million unique visitors to the Audi website, resulted in seven fan sites tracking the program for interested participants and generated more than 45 million impressions. The campaign also created more than 10,000 sales leads and 3,500 test drives, putting the A3 on track to beat its aggressive first year sales goals.

Snapshot campaigns
ARGs are becoming increasingly sophisticated and complex and can cost more than $1 million to roll out, although the average cost is generally between $500,000 and $1 million. Here are a few examples: 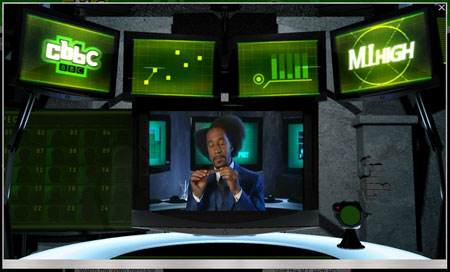 Real world events contained embedded secret messages and codes, such as creating a Bellagio fountain show suddenly "hacked" by a mysterious puzzle-master, Loki, at CES. Players found cryptic clues written in the skies, on architectural projections that transformed world landmarks and coded in a unique fireworks show -- clues that were captured in real time through photographs or video before they reached "the vanishing point" and uploaded to the website. 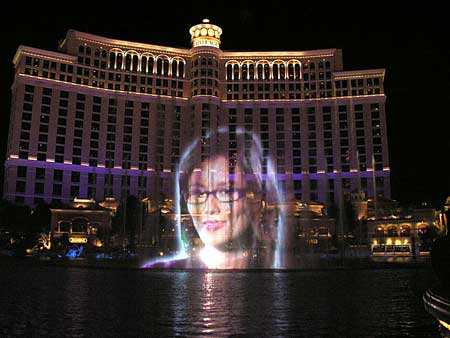 These events took place in 12 major cities around the United States, Australia, Canada, England, Germany and Singapore. Online communities of players developed that worked together to solve the puzzles, and created resources such as forums, photo/video archives, online hints and even web-radio stations that broadcast in real time during the live events. "The Vanishing Point" ultimately involved more than one million players and 20 million consumers.

World Without Oil: A joint project of Public Broadcasting Service's Independent Lens and its Electric Shadows web-original programming. This focused on a real-world problem -- solving a global oil shortage. Launched in April 2007, it was recently awarded the Best Activist Game at the SXSW Game Conference in Austin, TX. The game lasted 33 days; 1,850 players registered on the World Without Oil site where, inspired by fictional news accounts of a severe energy crisis, they contributed blogs, videos, emails, images and voicemails to an expanding user-generated narrative. There were 60,000 unique visitors by June 1; the archived game continues to draw about 6,000 monthly visitors.

Future trends
The biggest problem right now, notes Enderle, is that ARGs are primarily used as a promotion vehicle and, as such, it's a cost and not a revenue-driven activity, which limits significantly how quickly it can grow. But Enderle said HP Labs is bringing to market Mscape, a gaming handheld prototype that could let players use their surroundings as a backdrop for an immersive game. Mscape would serve as the underlying layer that game developers could use to take advantage of sensors like GPS or accelerometers like the ones in the Wii controller.

"This could revolutionize this type of game and fully commercialize it," says Enderle. "That is likely the biggest advancement we are expecting over the next 12 to 24 months and it could do for this segment what the Wii did for the game system market."

McKinney's Director of Interactive Strategy Jim Russell says, "The chief concerns are how do you engage your audience members and tell them a story they want to participate in and do it in a way that respects them? You have to be willing to let consumers do whatever they want with it."

Crowe adds that one challenge is how to reach out to a general TV crossover audience.

"Campaigns oriented to gamers have lower entry barriers in terms of the audience willing to engage in them," he says. "And kids' audiences pick up ARGS much quicker so many of these campaigns will be geared towards them. But the use of video in ARGs is changing the landscape substantially; add to that the increasing amount of bandwidth and broadband and we'll soon see even more astonishing campaigns because the benchmark is getting higher: Viewers won't settle for anything less."