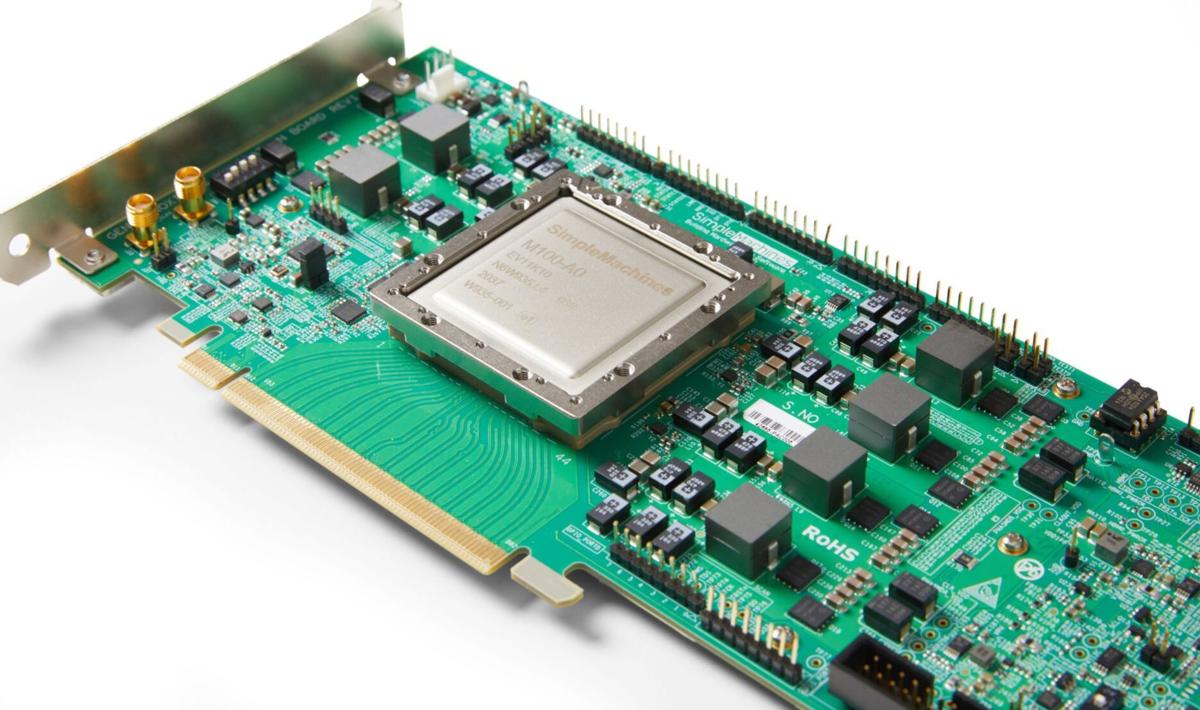 SimpleMachines' computer chip may not look all that different from what already exists in many computers, but the company's founder said the technology has the potential to speed up advancements in software development.

A Madison-based startup says its new technology could revolutionize computer programming and advance development of artificial intelligence and machine learning.

Founded in 2017 by UW-Madison professor and researcher Karu Sankaralingam, SimpleMachines Inc. is ready to launch a new type of computer chip that Sankaralingam said is faster and more powerful than currently available chips while using less electricity.

Launching sales early next year with the first lot of manufactured computer chips — called Mozart — SimpleMachines will begin working with customers — primarily companies with large data centers, such as banks — to adopt the new computer chip.

Sankaralingam said the chip has the potential to speed up development of artificial intelligence and machine learning, which has been hindered by hardware that can’t keep up.

“These things are changing very, very fast, and having a hardware solution that provides high performance and still supports that pace of evolution is very important,” Sankaralingam said.

Chips are at the core of what any computer does. Electronics from calculators to cell phones to cloud-computing servers are able to function because of the chips they use. Many chips are built for specific purposes — such as those in calculators or cameras — while others — such as cell phones and personal computers — are built to run many applications.

SimpleMachines’ chips have the potential to replace most other chips, Sankaralingam said, because it is more powerful and can be reprogrammed for new uses.

Sankaralingam launched SimpleMachines as computer chip development hit a roadblock — it was becoming harder to make better chips at a cheaper rate that were also energy efficient. While that was becoming more difficult, artificial intelligence and machine learning was advancing at rapid speed.

Artificial intelligence and machine learning need to process mass amounts of data and run many programs at one time, but Sankaralingam said many computer chips aren’t up to the task, either because they aren’t powerful enough or they use too much electricity to be cost efficient.

“That was really an opportunity for us,” Sankaralingam said. “We can strike when it’s really hot right now.”

The SimpleMachines chip addresses all those problems, Sankaralingam said. A single chip can run more programs at the same time and process data faster than other chips while also using less energy.

Though they can be built to run on less power, SimpleMachines designed this first chip to run on 75 Watts, which is the standard for most of the current machines processing massive amounts of data.

The chips aren’t likely to find their way into your home computer anytime soon. Instead, SimpleMachines hopes to sell the chips to the companies doing the cloud computing that supports many aspects of online life, such as image recognition or video recommendations.

Every year, as new tech comes along, electronic devices become obsolete because the devices’ chips were developed for only one task or application. The speed that software programs evolve far outpaces the speed of hardware development.

“These applications are changing every six months, but it takes two to three years to build a chip,” Sankaralingam said. “It’s like, ‘I want to build something to do this,’ but one year later than thing is not important anymore. The chip you built is kind of useless.”

Take GPS systems such as Garmin devices, for example. Those systems were a revolution for navigating in a car, but now, smartphones can run a GPS app well enough for most drivers.

Those years-old GPS devices are no longer useful because the chip inside can only run mapping and navigational software. But if a chip like the ones made by SimpleMachines existed, Sankaralingam said it could be reprogrammed with a software update to do other things, like become a screen for backseat passengers to watch movies.

In the three years since the company’s founding, it has grown to about 50 employees, many of whom are based in Madison or California. Among the ranks, Sankaralingam said, are a few engineers who formerly worked for computer-chip giants Qualcomm and Intel.

SimpleMachines will still have to compete with those computer-chip giants, but Sankaralingam is optimistic businesses will be willing to adopt this new chip.